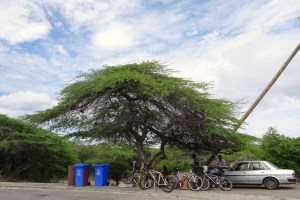 A nickname spray-painted on a wall 3.5 years ago meant to poke fun at the hysterical “Hollywood” antics of neighbors — especially those who congregate bo’i palu (under the tree) — has gone viral… putting their name on the map quite literally!

1. Formerly named San Willibrordus (after the Catholic Dutch patron of convulsions, St. Willibrord) — a veritable tongue-twister — this region has officially been baptized Williwood on Dia di San Willibrordus on November 5, 2011 with the unveiling of a community-effort: the (now) famous Williwood sign.

“It’s just funny, but at the same time great marketing!”

2. Natives are a melting pot of locals and US, Dutch, South American expats and go by “Williwoodians”.

3. The Williwood logo is a goat (often found roaming the area) and Williwoodians grill in style.

4. Williwoodians run a souvenir shop next to iconic Toko Willibrordrus (great place to pick up ice, refreshments, beer, pastechis etc on your way to the beach — or play a cutthroat game of dominos); the souvenir shop sells Williwood-branded bikinis, t-shirts, hats, (car) stickers, post cards, but also artwork by Williwoodians. 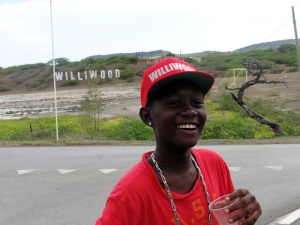 5. Williwoodians are constantly on watch… They’re known to rush out to the soccer field to re-arrange fallen letters during strong wind gusts… then brag about who got there first!

6. Williwoodians put out a Road Map featuring their awesome Williwood destinations. (I bet they’re working on an app, stay tuned!)

7. Williwoodians caught and reported on the tragic oil spill in Jan Kok…  many volunteered in the clean-up effort! (special thanks to Williwoodian Steve Sanderson, for creating these awesome YouTube updates)

9. Williwoodians will be participating in One Day on Earth  by creating a community documentary. (Can’t wait for 12/12/12!)

10. A Beautiful Intelligent Talented Charming Hell of a Woman (by the last name Wawoe) keeps a close eye on her neighbors — she even maintains a “Wall of Fame and Shame”. 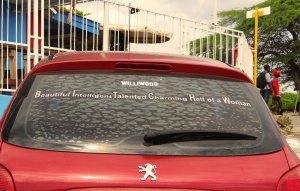 11. Williwood can’t be bothered with pine and plastic Christmas trees…