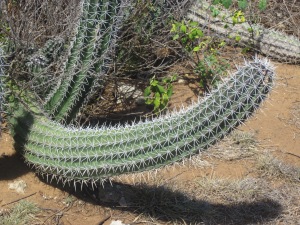 Acquiring the art/science of differentiating between Kadushi and Datu cactii is crucial if you’re yu’i Kòrsou. Americans avoid this issue altogether, referring to all of these long cylindrical cactii as “Candle”. Look, it’s okay, we’re not judging,  in fact, the Dutch simplify too, referring to both Kadushi and Datu as “Zuil” (column, pillar). When your climate is dry and your vegetation predominantly cactus, you really must understand nuances, because not all Candle cactii are alike.

5 things you should know about Datu and Kadushi:

1. Datu starts ramifying right from the ground level up; Kadushi has a single trunk and starts branching out when it reaches a certain height

5. Datu are often found in our “living” hedges, whereas Kadushi’s young branches are peeled and stewed (stew is called “Kadushi”, duh!)

And now, a brain teaser for the true connoisseur: