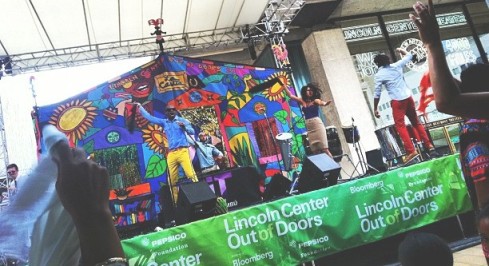 I’ve lived in the US for the past 12 years, most recently in Manhattan. Though I often hear Spanish and Dutch on the street, I hardly ever hear Papiamentu… My native language. I’m not that surprised; Papiamentu is only spoken by 250,000 people in the world. But “lack of Papiamentu” in my daily life does make me feel homesick.

So I realize that I have to work harder to create random sprinkles of Papiamentu. I have to pick up the phone and dial Curaçao or Holland (trust me, I appreciate Skype un mundu)

I sometimes deliberately post in Papiamentu on Facebook, you know, to start a written conversation.  I’m fully convinced that my personality is more vibrant, more creative, less uptight “in Papiamentu”, and this personality is somewhat lost in translation in my day-to-day life. So here I am, writing this post in English because I’d love for you to understand me. For you to understand us.

One of the highlights of my summer of 2012 was Kuenta i Tambú live in concert at Lincoln Center Out of Doors.

As soon as I heard their first Tambú (drum) beats, first strikes on the Chapi (metallic object used to plow land), first chants in Papiamentu… Diamanta’s hair wild and free, hips whining to the music like a jackhammer… The explosion of raw energy… I felt at home… in Manhattan… and tears streamed down my face.

I don’t think you plan momentous moments in life, hearing sounds from home, sounds from my childhood, adapted to contemporary senses, performed masterfully in the shadow of concrete skyscrapers, not palm trees… Teary cheeks and all, I looked around and saw people on their feet, dancing, gyrating their pelvis, smiling, singing along in Papiamentu… And I wanted to give them all a hug, individually, you know one by one, because right then and there, I felt accepted by a crowd of strangers. I felt like I belonged. And they made me feel that way.  Such a tremendous sense of pride.

The music of Kuenta i Tambú is inspired by traditional Afro Caribbean Music from Curaçao and European Dance. They found a clever balance between electronica, singing and chanting and the infectious rhythms played by ritual tambú drums. Some call it Global Bass, others prefer labeling it Tambutronic — it’s wild and colorful explosion of energy makes you want to get up and dance!

Kuenta i Tambú is based in Amsterdam, they were formed in 2005 after a series of educational projects at schools and theaters to introduce the music and culture of Curaçao to children in the Netherlands.