By 1000awesomethingsaboutcuracao / June 7, 2013 / Awesome, Made in Curacao, People / Leave a comment

Leo Floridas has introduced yoga to thousands of yu’i Kòrsou, stretching our potential and helping us move into new, greater possibilities mindfully. I visited Leo in April 2013, with one seemingly simple mission: to understand how a Shell oil refinery engineer came to proliferate yoga, health food, herbalism and education in Papiamentu in Curaçao.

Leo Floridas in his home office.

We sat down in his home office on a Saturday morning, surrounded by books in English, Dutch, Spanish, German, Papiamentu (and I’m sure I’m missing some other languages). Leo’s varied interests and voracious curiosity reflects in their titles and quantity. A steady breeze carried Leo’s partner, Natasha van der Dijs’ calm instructions in Dutch, Papiamentu and English from the yoga studio next door. Natasha was teaching a diverse group of children ages 6-10 as part of the yoga school Leo and Natasha run together. “We’ve taught thousands of students over the past 30-40 years,” says Leo. But Leo doesn’t boast, he merely states the facts, and there’s a big difference. “You see, we simply do what we have to do,” he says.

From the outside looking in, Leo lives rich in meaning led by what he perceives to be his life’s purpose… You know, that elusive thing that confounds and frustrates most of us to no end. But he doesn’t want us to fuss about his purpose… or our own purpose, for that matter. “It just came to me and I made it happen. I’m not sure it’s a positive or negative thing. It’s my duty. So I have to do it,” he says, matter-of-factly.

Leo was born to a Curaçaoan mother and Surinamese father, who immigrated in the 1920s. 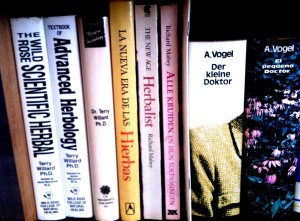 Some of Leo’s multi lingual books.

“Floridas is my father’s family name, there are many Brazilian-Portuguese names in Suriname. Names with Latin or Portuguese roots,” explains Leo. Leo’s mother descended from Guajira (Tierra Firme) indians and African slaves. Leo is particularly proud of his mother’s ancestor, spiritual cultural facilitator Belafaz Martis. “Great-great grandfather Belafaz taught Papiamentu to all the Roman Catholic priests who immigrated to Curaçao in the 1800s… he made it possible for African slaves to practice religion in their mother tongue,” says Leo.

In Leo’s younger years, he worked as an engineer at the Shell oil refinery and practiced judo competitively on the side. “A very close friend from primary school, Carlos Braaf (may he rest in peace), returned to Curaçao as a judo instructor and opened a school, after spending several years studying in the Netherlands. He introduced me to the practice of judo.” Leo recounts that he represented the Netherlands Antilles in the Pan American Games in judo in 1967. An awesome accomplishment in and of itself, but one that Leo merely views as a step in the right direction.

Yoga came to Leo in preparation for the Pan American Games, by way of the Daryanani family (of Indian descent) who also runs a yoga center in Bogota, Colombia. “One way or another I came in contact with Riley Daryanani… I believe it was through the ‘Three Voices’ [a popular Curaçao rock band Leo managed on the side]… He became my yoga master in 1968 – 1969, I visited his center in Bogota to deepen my practice… That’s when I read ‘Autobiography of a Yogi’ by Paramhansa Yogananda… Still working at the Shell, I would practice 2 hours of yoga in morning, 2 hours of yoga in evening, every day. That was my life,” he says.

“Autobiography of a Yogi” has inspired many people to pursue spiritual self-realization, including Steve Jobs (a biographer records that Jobs “first read [it] as a teenager, then re-read [it] in India and had read [it] once a year ever since”), George Harrison, Elvis Presley, Mariel Hemingway etc. A large framed picture of Paramhansa Yogananda hangs prominently above Leo’s desk, needless to say, his autobiography has influenced Leo deeply.

I wonder out loud how a devout yogi could justify working at an oil refinery.

Leo founded his ashram (yoga center) in Curaçao in 1973 after spending time in India and decided to leave Shell in 1979 to open a health food store, the first on the island. By 1981 he had become a popular TV personality on TeleCuraçao (local television station) teaching yoga and anatomy in Papiamentu. Leo’s most recent endeavors are related to promoting Papiamentu in science education by writing and publishing textbooks. For those of you trying to do the math, Leo is 75 years old, but doesn’t look a day over 50.

“I didn’t bring things to the island. Those things already existed. I simply did what I had to do,” he insists. I express some (youthful) skepticism, wanting very much to praise Leo for his awesome life and work… “Come on! This is CURACAO! This is a unique place! We’re very internationally oriented and influenced. The languages we speak, our geology, our location. We’re very open to new ideas. I just do what I have to do.”