By 1000awesomethingsaboutcuracao / October 31, 2013 / Awesome, Humor, Made in Curacao, People / Leave a comment 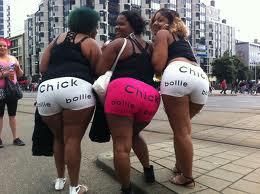 Chick bollie bollie’s from Curacao backing their ass up in Rotterdam, NL.

And who can forget this Yellow Claw YouTube sensation?

Scientists at the University of Oxford have recently uncovered evidence that women with big butts are not only the most intelligent, but also the most resistant to chronic illnesses. The study examined the fat accumulated in different parts of a woman’s body, and found that women with a phat ass were less likely to get diabetes, since they are more likely to produce hormones to metabolize sugar.

What’s more, women with a big butt, wide hips and a narrow waist can live longer, and even be more intelligent, since the Omega-3 fats stored in their butts support brain development.

“Marie Curie, for example, had to back that ass up in the lab all the time — and look how brilliant she was!” remarked butt researcher Benedict Pollen. “This supports the long-rumored story that Albert Einstein himself wore baggy clothing to try to mask the fact that he had it going on.”

Our big man of Baseball, Andruw Jones, has got it going on too.

The Oxford scientists were excited by the results, and wondered where they could get their hands on some big booty on their side of the pond. “I never stopped to think that JLo could be the next Nobel prize winner!” declared Pollen.

Granted Professor of Physics Sandra Melendez of the University of Arizona was unimpressed by the study. “Seriously? That’s how men are going to decide I’m smart? Whatever, I guess I’ll just take my award-winning research to Victoria’s Secret,” she told PNS. “Intelligent my ass, I’m pinche brilliant,” she said, noting that she was a runner-up for the Nobel prize this year.

“Maybe if I’d mailed them a picture of my culo I would have won the gold,” she remarked sarcastically. “In the meantime, I’m going to keep working on my research, hopefully one day the male-dominated science field will see my mind, not just my record-breaking booty.”

897. Baby got back and NO self-esteem issues!