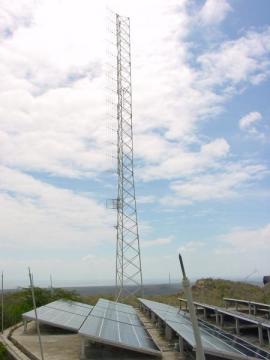 Radio Hoyer made history in 1984 by becoming the first commercial FM radio station in the world run on 100% solar energy!

They chose the top of the Tafelberg  (highest hill on eastern part of Curaçao) for their FM transmitting complex because it lent itself well to the use of a directional transmitting antenna system – to reduce power consumption. Unfortunately, Fred Chumaceiro, technical adviser of Radio Hoyer, found the site lacking (lines of) electricity.

Radio Hoyer considered many different options… and ended up deciding on solar power because of its great reliability (our equatorial sun always shines…!)

For the more technical among us, the effective radiated power of each of the two FM stations is 4 kilowatts (horizontal and vertical). With the high gain antenna system, a transmitter power output of only 300 watts is required for each station.