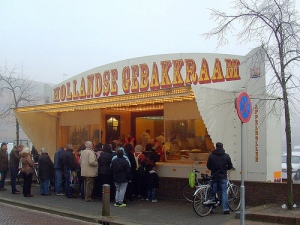 Oliebollen kraampjes in the Netherlands.

The first documented recipe appears in a Dutch cook book published in 1669, but the tradition is presumed to be centuries older (exact date unknown). The first iteration of the oliebol, was actually flat, more like a fried cookie than ball and consumed year-round, particularly during the colder winter months. 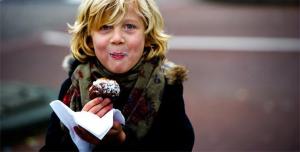 The homeless and hungry would knock on doors between December 21 and January 6, singing Christmas carols in exchange for oily cookies.  The cookie was transformed into a ball, containing more expensive ingredients (apple, currants, raisins) in the 19th century. Oliebollen are now ubiquitous Dutch New Year’s Eve treats and widely considered precursors to the popular American Donut.  But Americans love their sweet treat so much, that they’re available year-round, sometimes even consumed on a daily basis (we don’t blame them!)

Though temperatures never drop too much in Curaçao, our New Year’s Eve remains loyal to our Dutch settlers. We savor delicious oliebollen between December 27 and New Year’s Eve, to ring in a sweet and light new year. We recommend you do the same… No one wants ‘oliebol’ top on the beach!

2. Sift the flour, sea salt and remaining sugar into a bowl and make a whole in the center. Pour in the warm milk, rum, yeast mixture and the egg and mix well to combine.

3. Stir in the raisins, apple and lemon zest, combining well. Cover and rest in a warm place, until doubled in size – will take about an hour or so.

4. Bang the bowl a couple of times on the work surface to knock out some of the air.

5. Fill a deep-fryer or large heavy-based saucepan one-third full with oil and heat to 350F, or until a cube of bread dropped into the oil browns in 15 seconds.

6. Using two spoons, carefully drop rounded tablespoons of the mixture into the oil, use one spoon to push the mixture off the other, and cook for about 6 minutes, or until puffed and golden and cooked all the way through.

8. Sieve powdered sugar over the ‘oliebollen’ as well as a dusting of ground cinnamon, and serve warm. 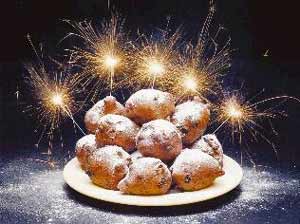 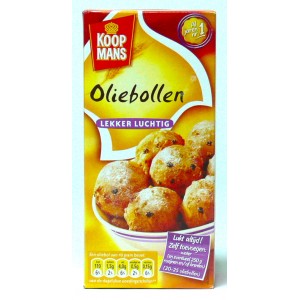