By 1000awesomethingsaboutcuracao / September 8, 2013 / Food, Made in Curacao, Restaurant, Street Food / One comment 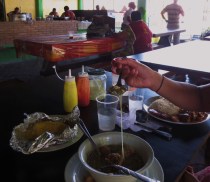 “Yambo, frankly, is the local term for gumbo, and it makes me laugh to think that so many cultures have their own version of this exact dish —whether it’s in West Africa, Belize, Darfur, Louisiana…or here, off the coast of Venezuela. We ordered some, much to Erik’s chagrin. Okra soup, of course, is slimy. And not just a little slimy, but a whole bowl of slime. However, I decided to give it the old college try, because the last time I had had it, it totally blew me away. It was at a Darfuri household in Doha, Qatar–where the slime was deliciously seasoned and served with something akin to Ethiopian injera.

… [Yambo] was served with funchi, which is the local term for polenta. It was not unlike the kind of starches that are served with this dish in West Africa (think “fufu,” which is served with the okra dish called “to.”) It always makes me happy to see how small the world really can be if you trace the cuisine. Of course, in this case, as with many West African dishes that have made their way across the Atlantic, the recipes came with the slave trade, which was, sadly, a major commercial enterprise in Curaçao.”

Like its population and language (Papiamentu), much of Curaçao’s menu consists of a medley of dushi ‘immigrants’. So much so that Travel + Leisure’s online magazine recently named Curaçao among the “Best Caribbean Islands for Foodies”: ‘with a population made up of more than 50 nationalities, Curaçao’s food scene is incredibly diverse. Restaurants run the gamut from French and Dutch to Brazilian, Indonesian, and Japanese. Local krioyo (Creole) specialties include yuana (stewed iguana), keshi yená (stuffed cheese), and kokada (coconut patties).’

I could go on and on about delicious Curaçao restaurants, but that’s what my friends over at Curacao Trip and TripAdvisor do so well.

I will, however, highlight a few Curaçao delicacies that have traveled far and wide – to make their originators feel at home in their new home. Some of the recipes have been adapted to locally available ingredients and modified to appeal to local taste buds. Others stand the test of time and remain true to tradition. Needless to say, the fact that you can find them all on one small island is truly awesome: 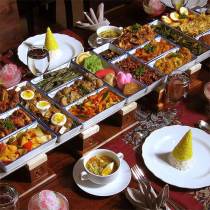 715. Indonesian Rijsttafel (calling this feast “Indonesian” is actually a misnomer: traditional Indonesian flavors were too extreme for Dutch colonial taste buds, so indigenous chefs had to soften their recipes by adding turmeric, lemongrass, ginger and other root herbs… this gave birth to a modified Indonesian kitchen: the “Indische keuken”)

716. The Multi-Cultural Spirit ‘Curaçao of Curaçao’ (consists of Spanish, German and Dutch ingredients — modified and adapted in Curaçao by creative Curaçaoans — and colored blue (and other lesser-known colors) to appeal to American cocktail aficionados)

737. Curaçao’s Passover Charoset (symbolizes the sticky-and-strong mortar Hebrew slaves used to build clay bricks in Egypt (Hebrew for clay is charsis or ceres), the preeminent Spanish Jewish philosopher Moses Maimonides gives us one of the first written recipes for charoset in the 11th century: crush “dates, dried figs, or raisins and the like…add vinegar, and mix them with spices.”)

740. Boyo or Bolo di Pan (Bread Pudding) (a quick Google search for the word ‘boyo’ and you’ll stumble upon Gil Marks’ Encyclopedia of Jewish Food, “Sephardim generally made bread – for much of history an arduous, time-consuming process – only twice a week, on Mondays and Fridays. After a few days, the bread would become stale and innovative cooks would seek new ways to utilize it as nothing was wasted. A favorite of these methods was to soak dry bread in water or milk (…) bollos de pan or boyo.”)

810. Oliebollen (“Oily Balls”) (the first documented recipe appears in a Dutch cook book published in 1669, but the tradition is presumed to be centuries older) 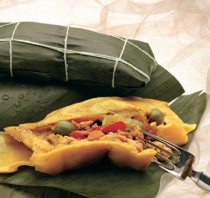 with Central American countries, other Caribbean islands, and even Brazil. My friend and anthropologist, Louis Philippe Römer, tells me that cornflour wrapped in (banana) leaf dates back to Pre-Columbian times. In fact, archaeologists have found evidence of tamale-making (Meso-american versions of Ayakas) as early as the classic Maya period (250-900)

816. Keshi Yená (Stuffed Cheese) (throws a culinary party for the typically discarded Dutch Cheese rind (red wax removed), stuffing it with a melange of spiced, seasoned meat (typically chicken), raisins, olives, capers, etc resulting in a perfect blend of cultures: “the stolid creaminess of the North meets the lively spiciness of the South” as described by cookbook author and TV personality David Rosengarten) 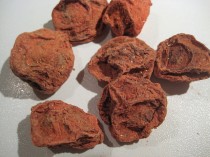 998. Sous di Pinda (Peanut Sauce) (can’t tell you how glad we are that the Dutch had the good sense of importing this creamy heaven on earth from their former colony, Indonesia (Dutch East Indies))

663. Pizza Hut Pizza… with Dutch Cheese! (Curaçao is the only place in the world where you can go to an American franchise that interprets an Italian staple (Pizza Hut) – and top your pizza with Dutch cheese (Gouda and Edam) instead or in addition to Italian Mozzarella)