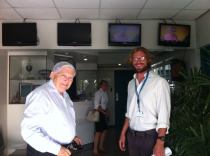 Curaçao filmmaker Alaric Alexander Smeets directed and produced “Nostalgia: The Music of Wim Statius Muller”, a deeply moving gem of a documentary about the life and work of “Curaçao’s Chopin”. Statius Muller makes a particularly fascinating subject — and not just because his music is guaranteed to give you goosebumps — but because he decided to delay his musical career until after he retired from a 35-year stint in security and counterintelligence. Hence Smeets’ tag line: ‘Pianist. Composer. Spy.’

Born in Otrobanda, Curaçao in 1930, Statius Muller began taking piano lessons at age seven from Jacobo Palm, the grandson of Jan Gerard Palm (1831-1906) widely considered the “father of Curaçao classical music”. Statius Muller’s musical affinity was strongly influenced by waltzes and Frédéric Chopin‘s mazurkas played a lot in Curaçao throughout his youth. He went on to receive a degree in piano and composition from the prestigious Juilliard School of Music (1949 – 1954).

In 1955, Statius Muller began teaching piano and music history at Ohio State University. But by 1960, at the height of the Cold War, got tapped by the Dutch government and decided to collaborate on the creation of a Dutch Counterintelligence Service, initially based in Curaçao. In 1972, he relocated to the Netherlands and proceeded to hold management positions at the Domestic Security Service (“BVD”) in The Hague and then at NATO headquarters in Brussels. After his retirement in 1995, he returned to Curaçao, and resumed his love affair with the piano.

Statius Muller has composed dance music, waltzes and mazurkas, but also Caribbean dances such as the tumba, derived originally from the African Congo. His works are no longer intended for dance, but rather stylized and refined into concert music. He has published some of his compositions in Antillean Dances for piano (opus 2, 4, 5, 6), but many of his 200+ compositions have yet to be published.

Statius Muller was awarded a well-deserved Silver Carnation by Dutch Queen Beatrix in 2012 for his contribution to the preservation of the musical heritage of Curaçao.