By 1000awesomethingsaboutcuracao / October 14, 2013 / Awesome, Food, Made in Curacao, People, Recipe / One comment 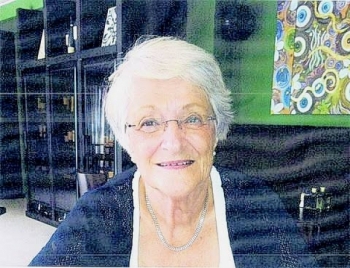 Curaçao’s best-known ‘Newspaper Chef’, May admits that she could hardly cook when she got married. She recalls the first time she tried her hand at stobá (stew): “I put in a whole pepper and nobody could eat it! My guests sat at the table with tears in their eyes,” she says laughing.

“My first cookbook was a gift from my mother-in-law,” she says. She recalls spending hours in the kitchen with her mother-in-law baking apple pie. “Once I got the hang of it, I started cooking on my own and experimenting with flavors.”

May started publishing her recipes in the Amigoe newspaper in the 1990s. “The editor wanted to include a recipe of the traditional Dutch pastry ‘oliebollen’ (oily balls) for the new year’s edition,” she recalls. Back then May used to fry the doughnut-like dessert in batches and hand them out to friends, acquaintances and family. “It was a big job, but I loved it.”

Her first few recipes were a big hit with readers and cooks, so her column ‘Kook mee met May’ (the Dutch ‘mee’ is pronounced: ‘may’) was published every two weeks. Believe it or not, “for a decade I submitted handwritten recipes to Amigoe.” It was only in the year 2000 that she started using a computer. (she’s even on Facebook nowadays)

May blushes when Palm mentions that she might have a cult following. “It’s funny when someone you least expect says that they cut out my recipes and try them. Once, by sheer mistake, my recipe wasn’t published in the paper and people came up to me to ask whether I finally stopped writing my own recipes.” May assures her fans that she is still writing recipes.

Here are some of her recent ones in Amigoe Express:

Curacao cooking with May – Quiche with smoked salmon