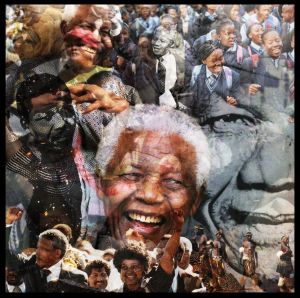 Nelson Mandela, long time champion of the anti-apartheid movement and former president of South Africa, passed away at the age of 95. He will be remembered for his unrelenting pursuit of racial equality and lifelong struggle against segregation and poverty, as well for his passionate belief in humanity. Mandela embodied that rare gift of Leadership (with a capital L) and was able to motivate millions with his words: from his testimony given during the trials leading up to his imprisonment to the speech he gave upon his release 27 years later, and the countless addresses and speeches given thereafter, Mandela provided us with no dearth of inspiring thoughts. Below are some of my favorite Nelson Mandela quotes.

“I am fundamentally an optimist. Whether that comes from nature or nurture, I cannot say. Part of being optimistic is keeping one’s head pointed toward the sun, one’s feet moving forward. There were many dark moments when my faith in humanity was sorely tested, but I would not and could not give myself up to despair. That way lays defeat and death.” — Long Walk to Freedom: The Autobiography of Nelson Mandela

“A leader. . .is like a shepherd. He stays behind the flock, letting the most nimble go out ahead, whereupon the others follow, not realizing that all along they are being directed from behind.” — Long Walk to Freedom: The Autobiography of Nelson Mandela

On love and personal freedom

“For to be free is not merely to cast off one’s chains, but to live in a way that respects and enhances the freedom of others.” — Long Walk to Freedom: The Autobiography of Nelson Mandela

“No one is born hating another person because of the color of his skin, or his background, or his religion. People must learn to hate, and if they can learn to hate, they can be taught to love, for love comes more naturally to the human heart than its opposite.” — Long Walk to Freedom: The Autobiography of Nelson Mandela

“I have walked that long road to freedom. I have tried not to falter; I have made missteps along the way. But I have discovered the secret that after climbing a great hill, one only finds that there are many more hills to climb.”

“The greatest glory in living lies not in never falling, but in rising every time we fall.”

“Difficulties break some men but make others. No axe is sharp enough to cut the soul of a sinner who keeps on trying, one armed with the hope that he will rise even in the end.” — From a letter to Winnie Mandela, 1975

“Like slavery and apartheid, poverty is not natural. It is people who have made poverty and tolerated poverty, and it is people who will overcome it. And overcoming poverty is not a gesture of charity. It is an act of justice. It is the protection of a fundamental human right, the right to dignity and a decent life.” — Ambassador of Conscience Award Acceptance Speech, November 01, 2006

“While poverty persists, there is no true freedom.” — Ambassador of Conscience Award Acceptance Speech, November 01, 2006

On changing the world

“Education is the most powerful weapon which you can use to change the world.” —Tromso, Norway, 2005