By 1000awesomethingsaboutcuracao / September 11, 2013 / Art, Made in Curacao, People, Photography / Leave a comment

Though Facebook is a major distraction most of the time, I’m also very grateful to Facebook, for it has introduced me to a very awesome Curaçao painter, graphic designer and photographer: Ariadne Faries. This is the second installment of Ariadne’s ‘Being Curaçao’ photo series (this first is here)… because the truth is awesome… so are cultural curiosities… so are the beliefs held by some of Curaçao’s people. So this is Curaçao just being… herself.

Ariadne took this photo at a “Profesión Solemne” while a nun made her eternal vows: promising to sacrifice her life and be faithful to the Monastery/Catholic church, the Mother superior and God. “Her promise is based on poverty, chastity and obedience. On this day she married Jesus Christ and received a ring she will wear on her right hand. This ritual has never been documented on the island. I am very close to these extraordinary women and they have given me the honor to be the first one. I take a lot of pride in the photographs. Many people don’t know that this centuries-old ritual still takes place today in the cloistered monasteries.” – Ariadne Faries 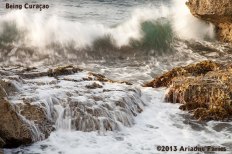 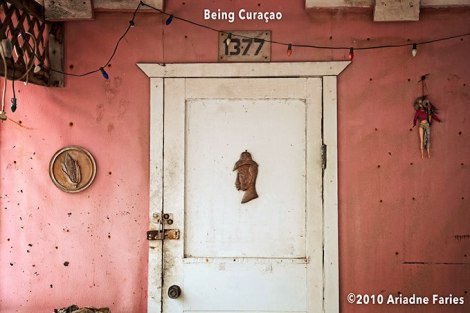 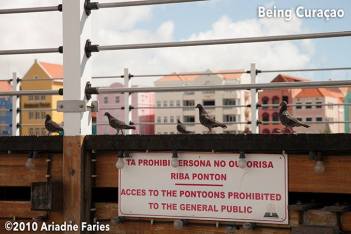 Another view of the Swinging Old Lady, Queen Emma.

Ariadne: “This is an Elegua I photographed at a celebration of ‘Dia de las Razas’ to honor the Saint Miguel Angel. This celebration is celebrated – in secret – on the island, many are intimidated by religions with African roots, so they’ve been hidden since the time of slavery and are still considered taboo nowadays. Per Google, the belief surrounding this ritual is that ‘there are countless of decisions to be made every day. With each decision, even the slightest variance can affect an outcome which produces countless additional decisions. This process goes to infinity. None of us can predict every possibility, within ourselves the outcomes are mind boggling, let alone the possibilities within the possibilities. The exception is Elegua. He is the quintessential prophet of cause and effect. Elegua is at once nowhere and everywhere. He is the ultimate embodiment of choice. He knows every decision possible and every outcome possible born of each individual decision. Oftentimes, Elegua is depicted at a crossroads because in life we are always at a crossroads, whether or not we feel it. Some decisions are harder to make than others, in those times we may feel we literally have no direction, no sense of where to turn. This is the domain of Elegua. One might mistake Elegua with chance or luck but within the realm of all-knowing, concepts such as chance or luck become obsolete. Yet, this is the very reason all good fortune and consequently all bad fortune is attributed to Elegua. For this reason, he is one of the first orichas to be received. He literally opens the doors in a person’s life and allows them to pass into good fortune— the fortune of their own life’s path.”

ALL PHOTOS BY ARIADNE FARIES.