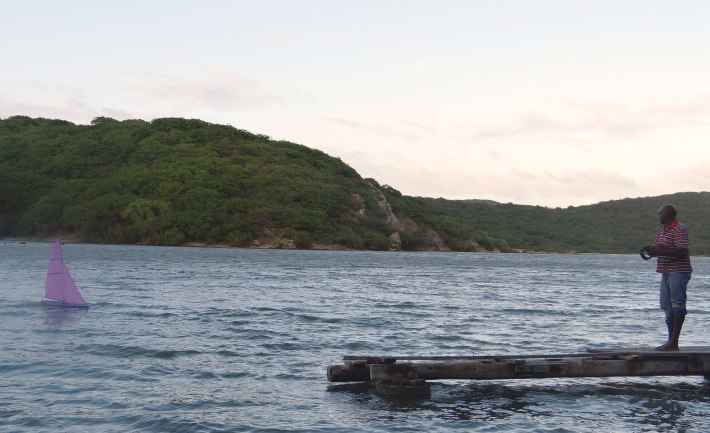 “You think the lady will remain faithful if her husband doesn’t love her? She’ll go find another man to caress her the way she needs! (…) We have to do everything with love… If you don’t love what you’re doing, you shouldn’t be doing it.”

I had the pleasure of meeting Ibi (pronounced: Ee-bee) in early January 2013 through his cousin Chuco. Ibi and Chuco were both born and raised in Curaçao’s idyllic fishermen’s village Boka Samí aka Boka San Michiel (in Dutch: St. Michiel) where most everyone is named ‘Zimmerman’ or ‘Constancia’ and most everyone marries ‘Zimmerman’ or ‘Constancia’.

Ibi and Chuco picked up boxing in their teens in Boka Samí. Towering over 6 feet tall, Ibi fell in the junior heavyweight category, while Chuco competed in the lightweight category. Both managed to compete in international tournaments in the 1980s and early 1990s and collect several championship belts. Though Ibi was the better boxer among the two [#11 in the world!], he retired from the sport in the mid-90s, but Chuco still practices from time to time, sharing his punching bag with the Boka Samí community, teaching neighborhood kids much like they had been taught when they were youngsters.

Ibi collecting one of his championship belts (early 1990s).

Recalling his boxing years, Ibi could very much relate to the great Muhammad Ali who famously said: “I hated every minute of training, but I said, ‘Don’t quit. Suffer now and live the rest of your life as a champion.'”

Ibi is not shy about showing off his championship belts. But these days he’d much rather show off his feather-light micro-sailboats, expertly crafted trai (fishing nets) and Gaudi-like sea stone wall. All handmade by Ibi.

“I started off [making the body of my micro-sailboats] out of fiber, but then I transitioned to epoxy. Over the years I kept iterating on the design… [the boat] mustn’t weigh much, bai e mester bai!”

He hands me three different boats.

“Can you weigh the progress? This one is so much lighter!”

Ibi is a boxer and fisherman by profession, but he’s also an architect, mason, carpenter, knitter, etc. He even built his own house. Him and his wife Rolinda Teresita raised three children, all three moved to the Netherlands to attend university and decided to stay. (A couple of his grandchildren were playing in the yard, visiting for the holidays)

“You know micro-sailboat racing isn’t cheap: 300 guilders ($170) just for the epoxy, then I have to order the sails in Aruba another 200 guilders ($120), spray paint costs another 50 guilders ($30)… I pay my own way to competitions [in Aruba and Bonaire]… See, if you love what you’re doing, you’ll ignore the costs, you just loose yourself in it. Same goes for business, otherwise the stress of it isn’t worth it.”

It takes Ibi 2-3 weeks to make a boat from scratch and he refuses to sell his older boats. “Each new boat [I make] symbolizes progress.”

Ibi reminisces about ‘SamiSail’ back when micro-sailboat racing competitions were held annually in Boka Samí.

“Organizers have to be motivated, motivation reinforces motivation, that’s how we make this into a sport… But it doesn’t matter to me, you can break the sport, but you can’t break me. I’ll just fly to Aruba or Bonaire to compete.“

We move outside to admire his Gaudi-like sea stone wall, “my wife and I would wake up early, take our wheelbarrow down to the beach, collect sea stones and corals, then I’d mason them into the wall, see the Flamingo shape over there?”

I wish I had taken a picture of Ibi and Rolinda’s wall! Approxmately 8 by 4 feet, stone formations of flamingos, iguanas, cacti etc Curaçao’s landscape, made out of Curaçao’s sea stones.

They’d wake up every morning to the same routine for about a month. “Some days I’d be less motivated than others, but Ibi would just power through: otherwise we wouldn’t have finished the work [we started],” Rolinda recalls.

Ibi goes on to show me his latest trai (cast net) all knitted by hand, weights attached along its perimeter, “this takes patience, every day un poko, un poko [slowly but surely,] counting your way through, each two rows requires an addition, so that the net expands and rotates when you cast it.”

Ibi’s patient persistence is remarkable. Needless to say, most of us aren’t as well endowed.

“We’ve been married for over 40 years, I’ve kept busy by raising our children, but now that it’s just the two of us… Ibi treasures his solitude, all the work he does is pretty solitary… I’m comforted by the fact that I know where he is and what he’s doing, but I do get lonely sometimes.”

Rolinda’s immaculate kitchen is filled with cookbooks; she invents frugal recipes, expertly ‘stretching’ leftovers (balchi piska is her favorite) and even shares her expertise by teaching a cooking class to neighborhood homemakers.